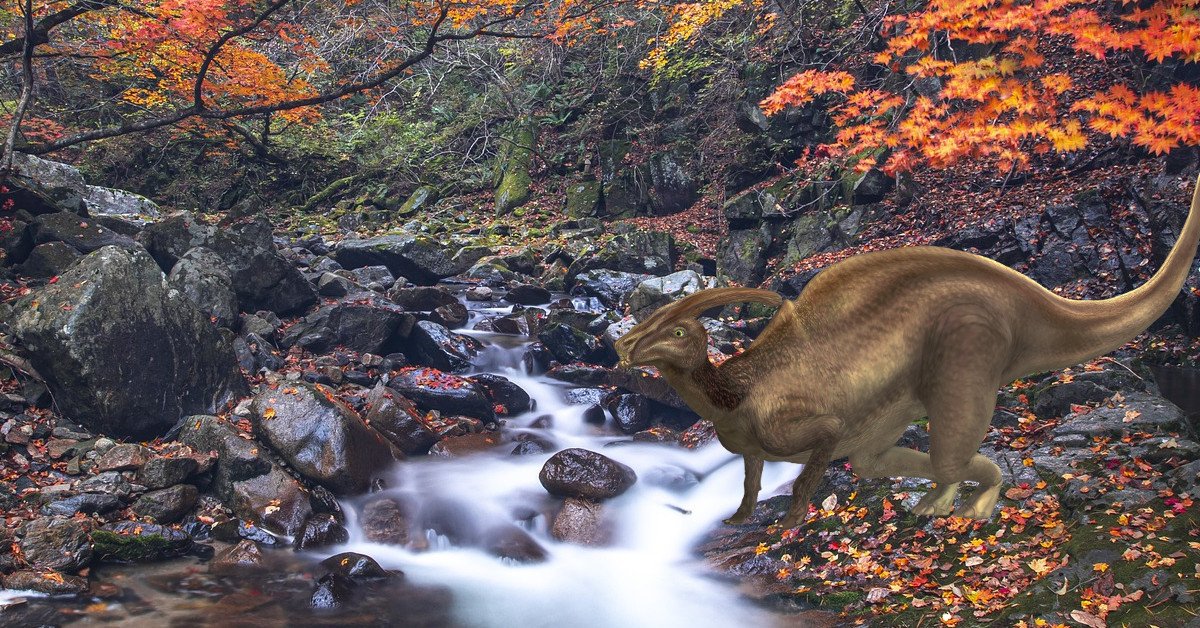 The Parasaurolophus is a genus of herbivorous ornithopod dinosaurs that flourished in North America and Asia during the middle part of the Cretaceous Period, about 76.5 to 74 million years ago. It’s also part of a group of dinosaurs known as Hadrosauridae, which means something like “duck-billed dinosaurs”. It had a small head, long hind legs, and short arms. It had a size of 9.5 m (31 ft) and was both a bipedal animal (meaning it could walk on 2 legs) and a quadruped ( an animal that walks on 4 legs). It had a deep tail and weighed 2.5 tons.

Parasaurolophus is most easily identified by its large, curved crest, extending from its nose to above the eyes. However, the function of this structure is uncertain. One suggestion is that it may have been used for species recognition or sexual display; another hypothesis suggests that it could produce sounds as a means of communication between individuals over long distances.
Thus far, only partial skulls have been discovered, including two with preserved crests. The crests were composed of keratin (a protein also found in horns, claws, hooves) covered with skin and were larger in adult animals than in juveniles.

As in some modern reptiles, such as to monitor lizards, the nostrils formed a pair of separate tubes on the surface rather than a single large opening on each side of the skull; this would have prevented water from entering the nose during surface air-breathing while swimming underwater.

Parasaurolophus was probably a herd animal; it is known from several skeletons that appear to have been buried together. This could indicate gregarious behavior or annual gatherings for breeding or nesting purposes. In addition, Parasaurolophus may have had both amphibious and terrestrial feeding behaviors, as evidenced by the structure of its neck vertebrae.
It had a long, flexible neck and a deep skull.

The fact that its nostrils were at the end of a tube indicates that it could use its nose to breathe through while underwater, and Examination of other hadrosaurs have shown that shellfish was probably an essential part of their diet; this also tells us that this dinosaur may have lived in a humid, semi-aquatic habitat near water.
Even though it was a bipedal animal, it’s thought to be able to walk on four legs if it had to, maybe to eat grass, or while trying to find shellfish underwater. Parasaurolophus probably spent most of the time grazing on the land, though. Like some other herbivores, it might have swallowed stones (gastroliths) that would grind and help break down the food in its stomach. This has yet to be determined.

The structure of the neck vertebrae indicates that, like all hadrosaurids, it could only chew food with its front teeth; food would be masticated by these grinding teeth and then swallowed. However, Parasaurolophus had an additional adaptation to its jaws and teeth structure, which is found in no other dinosaur: a secondary palate. This allowed the animal to breathe even when it had a mouthful of food, as well as protecting the airway from sediment stirred up by water passing over its flooded-feeding apparatus.

Parasaurolophus was one of the last non-avian dinosaurs before the Cretaceous–Paleogene extinction event (K–Pg). It is thought that this extra time enabled a great deal of diversification among hadrosaurids, which include several other notable species. The end-Cretaceous extinction event occurred approximately 66 million years ago. Parasaurolophus disappeared with the rest of the dinosaurs around this time.
There is not much evidence, but some scientists believe that these creatures were victims of an asteroid impact