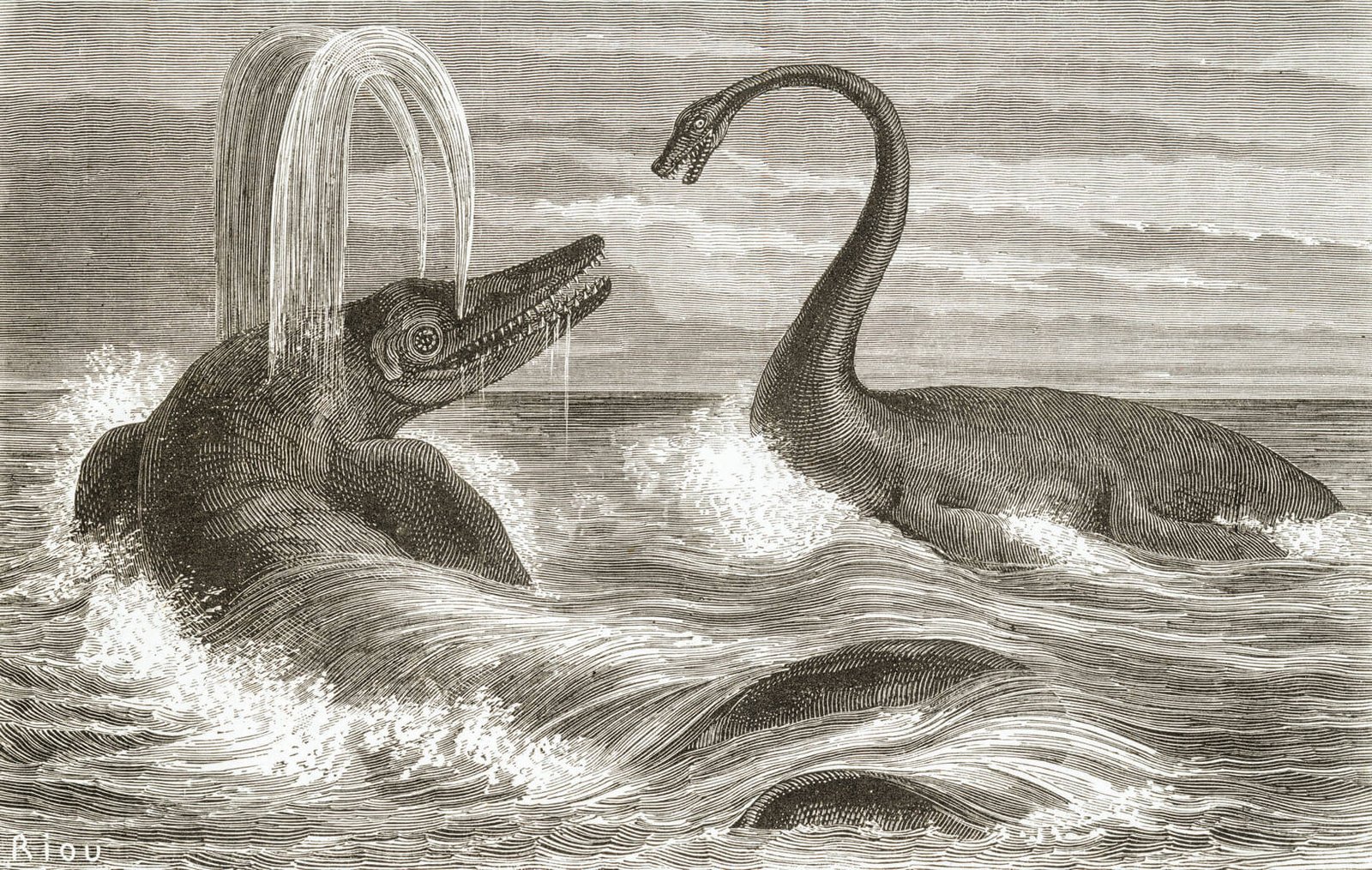 The name “Ichthyosaurus” (pronunciation IK-thee-oh-SAWR-uhs) comes from the old Greek, meaning “Fish” and “Lizard.” So it was weather a fish nor a dinosaur, but a marine reptile and lived 201 – 191 million years ago in what’s now Europe and some parts of Asia.

I want to emphasize – for clarity reasons because it’s easy to confuse these two:

Ichthyosaur is an order of animals that includes several marine reptiles that look like fish dinosaurs.

Ichthyosaurus is a genus (a part) of this order and the most popular and well-researched one.

Ichthyosaurus was part of the “Ichthyosaurs” group, fish-like reptiles that lost their legs at some point in their evolution and acquired fish-like tail fins to become fast-moving predators that lived in the seas when dinosaurs walked the land.

Ichthyosaurus had a streamlined body shaped like a modern dolphin; they also had four flippers, a short neck, and a long pointed snout. Ichthyosaurs grew up to 3 meters (11 ft) in length, but most were smaller.

Some of their Ichthyosaur relatives could reach a length of 11 meters (36 feet); however, there are even records of larger specimens measuring 27 meters or even as much as 35 meters long, making them the biggest marine reptile that looked like a fish dinosaur.

Ichthyosaurus Diet - What did they eat?

Ichthyosaurus, like all other marine reptiles, was a carnivore, not a herbivore. They had sharp teeth, which they used to catch fish or squid. The shape of the Ichthyosaurus head was also specially adapted for catching and holding fast-moving prey.
Fossils evidence even suggests that they sometimes attacked larger dinosaurs by using the same ambush tactics they’d use on their normal food source. As mentioned above, there is fossil evidence showing that several ichthyosaurs may have tried to attack an injured Plesiosaur. The Ichthyosaur probably ended up being dinner for the Plesiosaurus, who also became a top predator after Ichthyosaur disappeared.

Ichthyosaurus gave live birth, which meant that their young were always ready to hunt as soon as they were born. How do we know? Since Ichthyosaurus was an air-breathing reptile, it had to go on land to lay eggs in the sand, as turtles and crocodiles do. Their body structure was made for swimming and made it impossible to go on land, laying eggs. This, in turn, means the only way to reproduce was by giving live birth as whales and dolphins do.

Scientists believe that this also explains why many Ichthyosaur fossils are found fossilized inside the remains of other marine life, mostly fish and squid – probably because they didn’t have time to know what was attacking them before it consumed them!

The Ichthyosaur had a streamlined body and four flippers, which evolved from its forelimbs. In addition, Ichthyosaurus has a long, pointed snout that contains the nostrils and a mouth lined with sharp teeth used for biting food. The tail was also large and fish-like, with a hole in the middle. This is because the Ichthyosaurus used its tail for propulsion, like a fish.
The vertebral column was actually fused into one solid piece, forming a stable spine that could have helped to support the large body. Ichthyosaurus had the same number of vertebrae as humans but more ribs than any other known animal; most modern fish have only ten to thirteen pairs of ribs. The Ichthyosaur had up to 66 pairs of ribs, which would have helped it to float when resting on the seafloor.

Ichthyosaurus looked more like a fish dinosaur, while Plesiosaurus looked somewhat like a brontosaurus with flippers. However, both creatures were marine reptiles, lived in similar habitats, and carnivores perfectly adapted to life in the water and at the top of the food chain.

Fun fact: Some people who believe in the existence of Nessi (Loch ness monster) think it’s a Plesiosaurus!

Ichthyosaurus Facts In A Nutshell