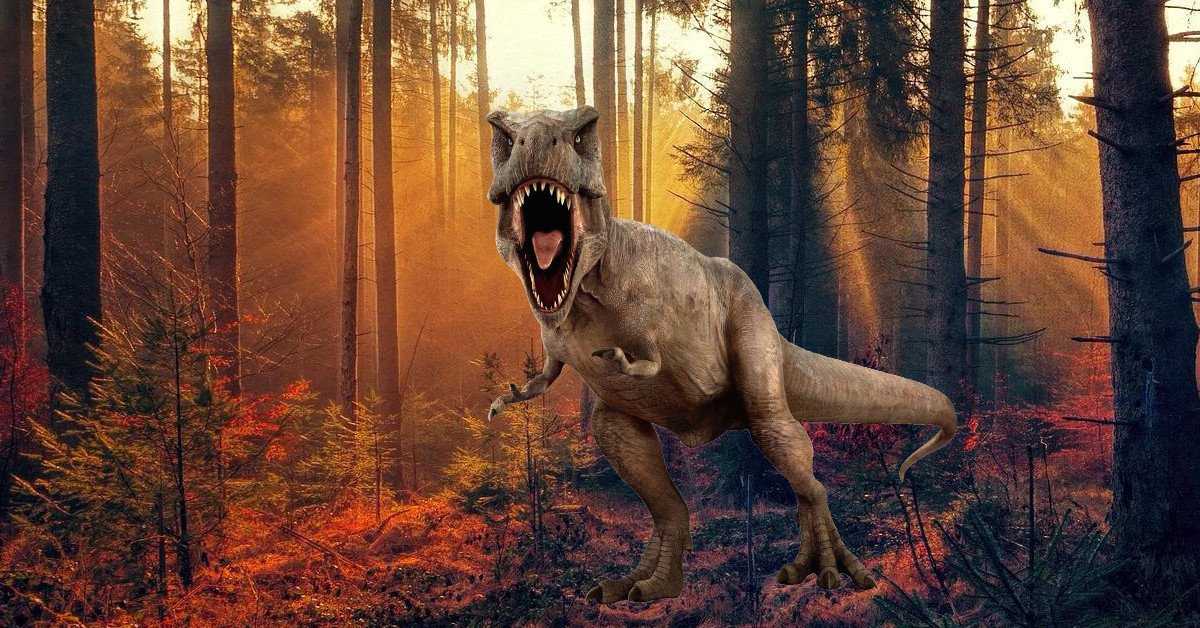 It’s safe to say that Tyrannosaurus Rex is one of the most well-known dinosaurs in history. T-rex has appeared in numerous movies, television shows, and books. Often tyrannosaurus rex is associated with being a fierce predator, but they were probably scavengers as well.

It was a very large dinosaur weighing approximately 10 tons and being 40 feet long. However, despite being such a large animal, tyrannosaurus rex was very fast, running at speeds up to 20 mph.

Here are 22 of the most exciting Tyrannosaurus rex facts!

Tyrannosaurus rex lived all over North America, but Scientists cannot pinpoint where Tyrannosaurus Rex lived because this is such a rare species to find a fossil.
Tyrannosaurus means “tyrant lizard,” and “rex” means “king” in Latin.

They lived during the last dinosaur era, called the Cretaceous period, which took place around 66 million years ago.

Tyrannosauruses used their large head as an offensive weapon to defend themselves.

Its arms were small compared to its body size, but they could still use them as weapons if they had to.
They also developed scales similar to crocodiles to protect vulnerable spots such as their underbelly, which kept them safe from attacks.

A study on their skull samples found that Tyrannosaurus Rex had in fact sharp senses of smell and hearing.

Recently tyrannosaurus rex’s cousin, Yutyrannus, was found in China. This dinosaur is much larger than T-rex and covered in feathers.

Smaller tyrannosaurs were hunted by crocodilians, raptors, and even other big Tyrannosaurs, which means they were cannibals, but adults weren’t fazed by these predators anymore.

It had 50 serrated teeth on both sides!
This dinosaur could grow up to 40 feet long and 15 feet tall!

It could run at speeds over 25 miles an hour!

Even though Tyrannosaurus had a fast running speed, they couldn’t run for long distances because they didn’t have large lungs or leg muscles.

They were only 20 inches long after hatching.

It was a bipedal (walked on two legs) dinosaur
During Tyrannosaurus rex’s time, it lived in what is now North America.

It was a carnivore and could eat up to 80 pounds of meat at one sitting,

Tyrannosaurs’ most common prey were hadrosaurs, ceratopsians, and even smaller tyrannosaurs!

Tyrannosaurus had a life span of about 30 years.

Their impressive tail was a counterbalance to its head when it ran, which made Tyrannosaurus run faster than other dinosaurs of its time; scientists think Tyrannosaurs could grow up to 25 miles per hour.

Tyrannosaurus jar muscles would have been strong enough to bite through bone, and they had teeth that were 2-3″ long and 1 inch wide! This makes Tyrannosaurus one of the most dangerous carnivores in history. If tyrannosaurus rex had lived during our time, it could eat a car!

Tyrannosaurus had an elastic ligament in the knee region; this elasticity made Tyrannosaurus able to stretch out its legs while running and kept its leg muscles from tearing due to the stress put on them by tyrannosaurus’ long limbs and fast running speeds.