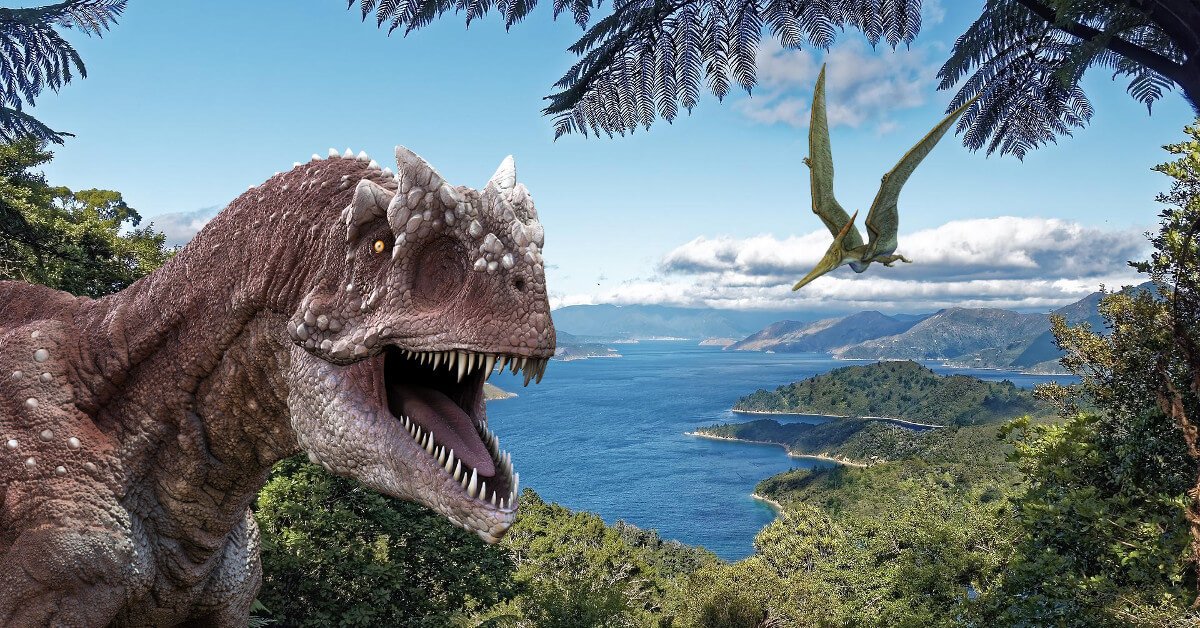 The Mesozoic Era was the period of Earth’s history between 252 and 66 million years ago when dinosaurs roamed Earth.
But the Mesozoic wasn’t only a time of great diversification. It was also a time of mass extinctions, when many species that had previously thrived suddenly disappeared from the fossil record, never to return. This includes marine reptiles like plesiosaurs and ichthyosaurs, and many groups of flying reptiles called pterosaurs. Although it isn’t certain what caused these extinctions, much evidence suggests that they were due to a large asteroid impact somewhere on Earth. Some scientists believe that this asteroid might have been what ended the reign of the dinosaurs at the end of the Cretaceous period about 65 million years ago.
Other changes happened during the Mesozoic Era as well! During this period, all modern plant families evolved from their prehistoric ancestors. Flowering plants first appeared in the mid-Cretaceous, but they didn’t become dominant until much later in Earth’s history (during the Cenozoic Era).

The major types of plants that lived during the Mesozoic Era were conifers and ferns (both still around today), as well as cycads (a type of palm-like tree), and seed ferns (ferns that bore seeds like flowering plants instead of spores like today’s ferns). 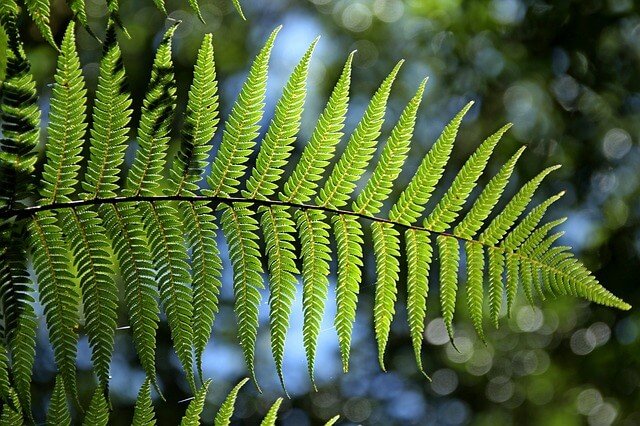 What animals were dominant during the Mesozoic Era?

The Mesozoic Era is also called the age of reptiles. The first dinosaur-like animals were small lizards that strolled on two legs, but they lacked several specific dinosaur characteristics. At the beginning of the Mesozoic era, dinosaurs were prey to bigger reptiles, until they developed and became bigger, faster, and stronger.

The Mesozoic Era was the age of reptiles. But this period saw the emergence and diversification of several major groups of animals, including birds, amphibians, reptiles, fish, and mammals. Here are some examples!

Birds of the Mesozoic Era

Most people think of dinosaurs as the giants that roamed the earth millions of years ago and went extinct. But did you know that some of them survive to this day? It’s true! Birds evolved from dinosaurs in the first place, so it should come as no surprise that they also existed in the Mesozoic Era. Today’s survivors include birds like ostriches, emus, and kiwis.

What types of birds were there, though? And where did they live? Several bird fossils have been found all over the globe, including in North America, Europe, Africa, and Asia.

Here are some examples of birds that lived in the Mesozoic Era:

Enantiornithes: These were probably the most common type of bird in the Cretaceous Period (the third period of the Mesozoic Era). Enantiornithes had teeth and claws on their wings for catching prey. They also had asymmetrical feathers and an opposable second toe on each foot—unlike modern birds, who have symmetrical feathers and a non-opposable second toe.

Ichthyornis was a species of seabird that existed during the Mesozoic Era. There are many different opinions about exactly how it looked and how it behaved, but many believe that Ichthyornis looked a lot like a modern gull, and may even have been the ancestor of all modern seabirds.

They were first discovered in China in the nineteenth century, and their name was inspired by their long beaks that reminded people of an ancient Chinese philosopher.

Confuciusornis were small- to medium-sized birds. They were probably omnivores based on their beak shape, which suggests they used it for eating bugs and/or nuts or seeds.

These birds reached a maximum length of 2 meters (6.6 ft) and were similar in shape to loons, but with large, non-overlapping feet. Hesperornis was the largest known member of the Hesperornithiformes, an extinct group of aquatic diving birds. They were carnivorous and probably preyed upon fish and mollusks. The beak was long, thin, and hooked at the tip, with sharp teeth lining the jaws. The neck was short, as was the tail. The legs had no webbing between their toes.[4]

Birds first appeared during the Mesozoic Era. They evolved from feathered dinosaurs. The first bird fossils are from the Late Jurassic period. Scientists think that these birds were about the size of a chicken, and were able to fly, but were not good at it.

Mammals of the Mesozoic Era

Mammals are known for being warm-blooded and having hair or fur. Our modern world is full of mammals: furry, four-legged friends like dogs, horses, and cats, as well as our incredible selves. But it wasn’t always that way.

For millions of years, dinosaurs ruled the planet. Mammals scuttled around in the underbrush, too small to be noticed by the giants around them.

But with the help of the massive asteroid crash 66 million years ago, the dinosaurs went extinct—leaving room for mammals to come out into the open and evolve into the massive variety of creatures we have today.

So what were those little mammals like? Here are 3 mammals of note from the Mesozoic era:

Amphibians of the Mesozoic Era

The Mesozoic Era was called the age of the reptiles, but it was also home to a variety of amphibians. While dinosaurs ruled the land, amphibians were among the most diverse groups in freshwater environments.

Many amphibians underwent big changes during the Mesozoic Era. Frogs started small with little legs and tails, but by the end of the Cretaceous, many were similar to modern frogs—complete with webbed feet and long hind limbs for jumping!

Paleontologists discovered the earliest amphibian fossils dating back to the Devonian period about 400 million years ago. During this time, amphibians evolved from lobe-finned fish into tetrapods with legs that allowed them to crawl out of the water onto land. The Mesozoic was a time when dinosaurs dominated the planet, but amphibians were still around—they just weren’t as numerous or diverse as they had been in earlier periods.

The Mesozoic era began 252 million years ago and ended 66 million years ago. During this time, amphibians ranged in size from 2 inches to over 13 feet long. Most of them were small carnivores.

Two examples of amphibians in the Mesozoic Era are:

The Parotosuchus, which lived in the Triassic period, is one of the earliest known ancestors of modern-day reptiles. Due to its strange and distinctive head shape, it has also been nicknamed “the cow-headed crocodile.” It was a piscivore (fish-eater) that lived in freshwater bodies.

Finally, there’s the Diplocaulus, which was small (about 50 cm long) and had a dome-shaped head with large eyes that gave it excellent vision. Its skull was very thin, making it easier to bite through prey’s flesh and bones. This creature has been dubbed “the boomerang lizard” because its head shape resembles a boomerang when viewed from above or below!

The Parotosuchus, which lived in the Triassic period, is one of the earliest known ancestors of modern-day reptiles. Due to its strange and distinctive head shape, it has also been nicknamed “the cow-headed crocodile.” It was a piscivore (fish-eater) that lived in freshwater bodies.

Finally, there’s the Diplocaulus, which was small (about 50 cm long) and had a dome-shaped head with large eyes that gave it excellent vision. Its skull was very thin, making it easier to bite through prey’s flesh and bones. This creature has been dubbed “the boomerang lizard” because its head shape resembles a boomerang when viewed from above or below!

Reptiles of the Mesozoic Era

The Mesozoic Era, which came after the Paleozoic and is commonly called the “Age of Reptiles”, spanning over 180 million years. During this time, dinosaurs roamed the earth and pterosaurs flew overhead. If you’ve ever wondered which reptiles lived during the age of the dinosaurs, we’ve got a list for you!

While dinosaurs are probably what most people think of as they consider the Mesozoic Era, they weren’t alone in exploring this period. There were plenty of other reptiles who also lived in this era, including:

Turtles have been around for a looooong time, and they’ve adapted to survive throughout all these years. That’s right, turtles have been around since the age of the dinosaurs! Can you imagine what life was like for turtles back in the Mesozoic Era? They were just roaming around, living their best lives, eating their turtle food, and making friends with the other animals.

Mosasaurs were large marine lizards that lived during the Mesozoic Era, right alongside the dinosaurs. They were reptiles, but they’re more closely related to monitor lizards than they are to snakes. Their fossils have been found all over the world, but they’re most common in North America because that was where they lived. They mostly ate fish and sea turtles, but there are some fossilized shells of ammonites that have bite marks from mosasaurs on them, which means mosasaurs tried to eat ammonites sometimes.

The plesiosaurus, for instance, was a reptile with a long neck and sharp teeth. It’s one of the most mysterious creatures from this period because no fossils have been found on land—only in water.

The ichthyosaur was another aquatic dinosaur that looked like a mix between an alligator and a fish. It swam through the oceans hunting squid and other small sea creatures. They were so fast they could outpace even sharks!

And then there are the pterosaurs—the flying reptiles that could grow as big as 16 feet across from wingtip to wingtip! These guys had membranous wings like bats do today, but their bodies were covered in scales instead of fur or feathers (like modern birds).

Insects of the Mesozoic Era

Insects have been around for a pretty long time, but they exploded in the Mesozoic Era. There were beetles, bees, dragonflies, grasshoppers and crickets, ants, and wasps. Butterflies, for example, trace their origins back to the very beginning of this era—a whopping 250 million years ago. At that time, they were primitive moths called Micropterigidae. They laid eggs on a plant called an angiosperm that wouldn’t evolve into grasses until over 100 million years later.

The Mesozoic era ended about 65 million years ago with intense volcanic activity and a series of catastrophic meteor impacts that caused widespread devastation on Earth and the end of all nonavian dinosaurs.