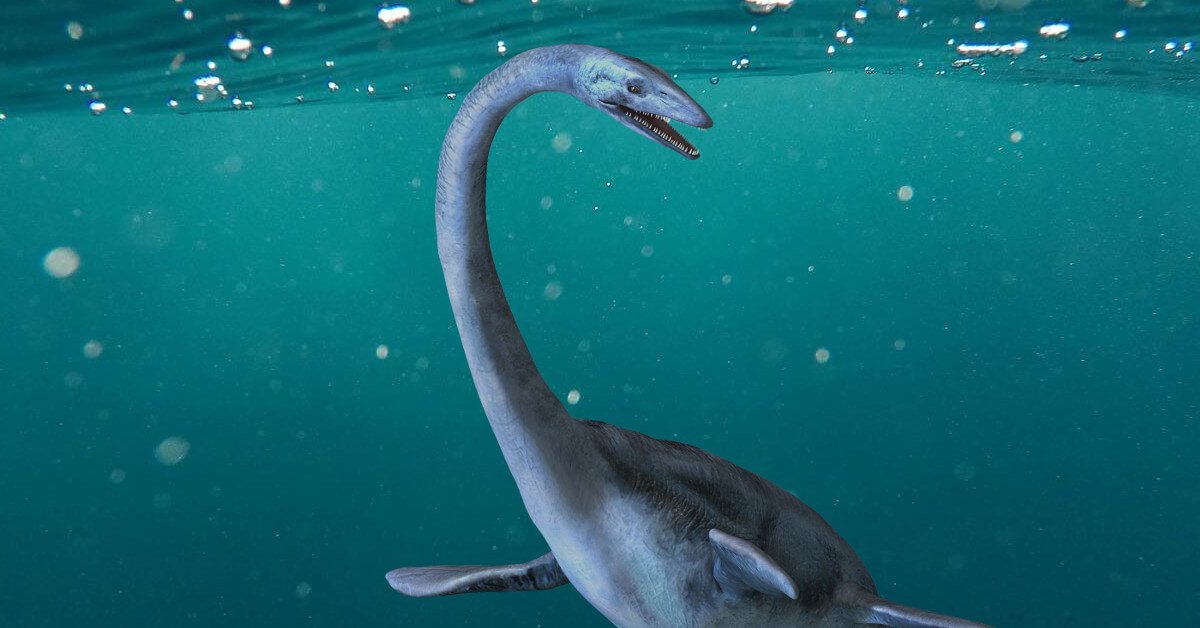 Plesiosaurus often gets confused for a dinosaur because it looks like a smaller brontosaurus with flippers instead of legs, but certain requirements must be met to get classified as a dinosaur, starting with the fact that dinosaurs are land animals and Plesiosaurus is a marine animal. Another point is that dinosaurs must have their legs directly underneath them, not to the side like Plesiosaurus flippers.

Still with me? The Plesiosaurus, as mentioned before, is a marine reptile. It has sharp teeth and is carnivorous, unlike the long-necked vegetarian dinosaurs like the Apatosaurus. Plesiosaurus devoured fish and squids and would maybe even eat smaller plesiosaurs. Yum!

Where did plesiosaurs live?

Plesiosaurus lived roughly 155-145 million years ago during the Jurassic Period. It lived in what’s now England – at least that’s where the best fossils have been found.

How big was a plesiosaur?

It grew up to 15 meters long, up to 4 meters tall at the hips (in larger specimens), with four short thick flippers. That means it was much smaller than other “dinosaurs” with a long neck.

Is Nessie a Plesiosaurus?

Well, who knows? But chances are pretty low. First off, there are no plesiosaurus fossils in Loch Ness, which means that even if a long-necked creature was living there, it’s not a Plesiosaurus.
Another point against this theory is that the plesiosaurus couldn’t lift its head out of the water, as described by Nessie’s fans. It was too heavy to lift it high.

The mosasaur was one of the largest marine predators in history, and it’s said that even smaller plesiosaurs could become its prey. It looked like a mix of a whale and a crocodile. It had no long neck, and the only similarity to a plesiosaurus is that both animals swam in the water and appeared like dinosaurs but are classified as marine reptiles.

The ichthyosaur wasn’t a dinosaur either. It was another marine reptile with a short neck and looked more like a fish than a dinosaur. Ichthyosaur means as much as “fish lizard.” It was another carnivore who ruled the water.
I’m somewhat glad these animals don’t exist. But, can you imagine swimming in the sea and just seeing a long neck coming out of the water from nowhere. Aah, that would be scary!

So, which dinosaur with a long neck swims in water?

Long story short! Plesiosaurus, even though it wasn’t a real dinosaur, but a marine reptile, that lived during the same period as the dinosaurs and is depicted as one in culture and often even in documentaries.