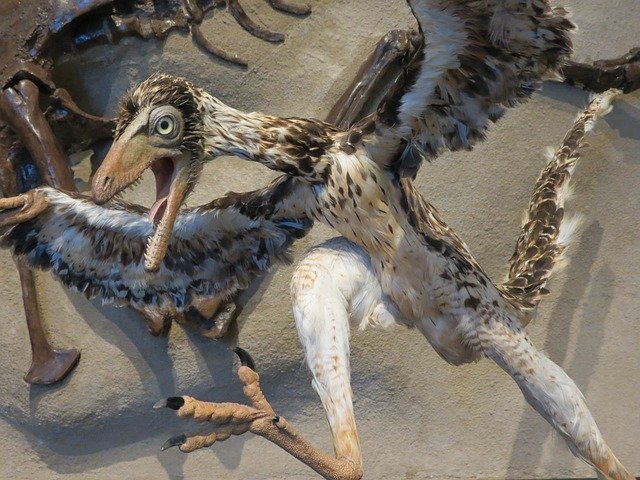 Archaeopteryx is the first name that comes to mind when thinking about flying dinosaurs. It was a bird-like dinosaur that lived about 150 million years ago. These animals had some dinosaur-like features, like teeth and sharp claws and wings, although they could not fly very far. Thus, Archaeopteryx is a “missing link” between birds and dinosaurs.

They lived during the same time as Pterosaurs, but Pterosaurs are “flying reptiles,” not dinosaurs, making Archaeopteryx the only prehistoric animals called flying dinosaurs.

It wasn’t a good flier, though.

Archaeopteryx was a meat-eater. It had a hooked beak, sharp teeth, and claws to grab prey like lizards or small mammals.
These Archaeopteryx were about as big as a crow with a wingspan of 1 meter and a weight of 400 grams. Thus, it was probably not a very good flier compared to most modern birds, but comparable to a pheasant (who rarely fly a distance longer than 2km/1.2 miles in one fly).
There aren’t many fossils preserved of Archaeopteryx because this animal was relatively small and fragile, so it didn’t leave many bones behind when it died. They also were covered with feathers all over the body, giving them their very bird-like appearance.
Other prehistoric animals lived during the same period, but they don’t count as flying dinosaurs. These are called Pterosaurs.

Another familiar name is Pterosaur – they were meat-eating flying reptiles that lived 228 to 66 million years ago during the time of the dinosaurs. They were the first creatures to be able to fly. Thus, the name Ptero-Saur means “wing lizard.”

Well, here’s the bummer. There are no flying dinosaurs. Even though Pterosaurs are closely related and look like flying dinosaurs and are often called flying dinosaurs in movies, they’re not classified as such. Pterosaurs are classified as reptiles, turtles, and crocodiles, although they are more closely related to birds.
They had many different types of wings: Pterodactylus had long, pointed, fragile wings; other kinds of Pterosaur had enormous feathered wings or short stubby ones.
There were over 100 different kinds of pterosaurs species with wingspans from 1 to 33 feet long.
Pterosaurs had very lightweight hollow bones, and skin stretched from their fourth finger (a lot longer than usual fingers) to the toes or ankles (depending on the species), which helped them fly.
Some of the pterosaurs had teeth, while others did not. Scientists believe that they live on a diet including fish, insects, and small mammals.

Pteranodon was one of the biggest types of Pterosaur. It could grow to over 25 feet long with a wingspan of 40-50 feet and had teeth. It lived during the late Cretaceous period, around 66–65 million years ago.

Another popular kind of flying dinosaur was Pterodactylus. It was small, only growing to about 26 inches long (not including the tail), with a 4.3–4.8 feet wingspan. Pterodactylus lived during the late Jurassic period, about 150 million years ago in Europe and North America. Unlike Pteranodon, it did not have teeth. Instead, it mostly ate fish and insects.

With a wingspan of 10 m (33 ft), Quetzalcoatlus was much bigger than any other known flying creature – both living and extinct. It ate plants, fish, and small mammals. Some scientists say that this creature could have been even bigger! It had no teeth and a long tail, which it could use to balance in the air. Quetzalcoatlus lived during the Cretaceous period. Their fossils have been found in places such as Texas, Brazil, and Argentina.

There are two main groups of Pterosaurs:

Pterodactyloidea (meaning “winged finger”) pterosaurs and includes the most famous Pterosaur, the Pterodactylus (pointing “wing finger”) – a short-tailed flying reptile, with a wingspan of 50 – 75 cm (20 – 30 inches). Most fossils of this species come from Germany and England.

Pterodactylus lived about 152 million years ago, during the late Jurassic period.

Pteranodon and Quetzalcoatlus belong to this group as well.

Rhamphorhynchoidea were long-tailed Pterosaurs with a long pointed beak, and most of them had, unlike most Pterodactyloidea, teeth. Most of them were also relatively small, having a wingspan of fewer than 2.5 meters (8 feet).

Flying Dinosaurs In A Nutshell