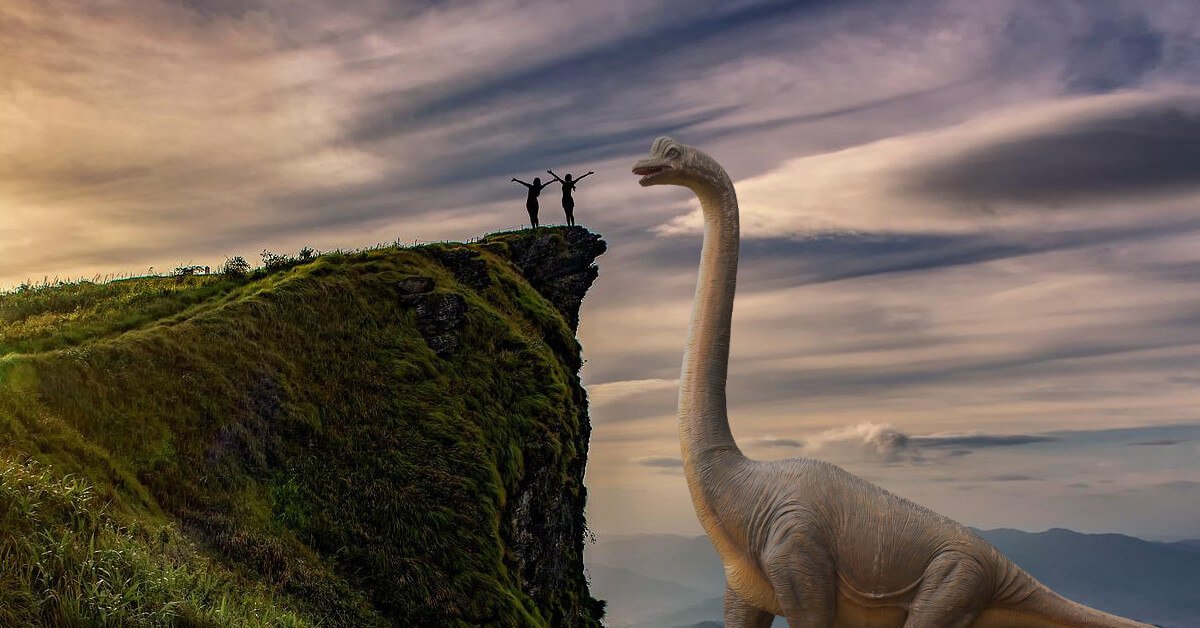 Sauropod. Dinosaurs with long necks are called sauropods. Sauropods were dinosaurs with long necks, long tails, legs like an elephant, and small heads compared to their body size. The sauropods lived from the late Jurassic period to the late Cretaceous period, and they disappeared along with most other dinosaurs 66 million years ago! More than 100 genera known as sauropods such as Apatosaurus, Brachiosaurus, Brontosaurus, Brachylophosaurus, Camarasaurus, and Diplodocus.

Why did sauropods have such a long neck?

Sauropods were herbivore animals, which means they ate only plant matter, and they had long necks to reach leaves on high trees, similar to a giraffe. Here’s another interesting fact about them: Sauropods eat stones, so-called gastrolith, also known as stomach stones, or gizzard stones, which help them digest their food.

Just in case you have digestion problems – you’re not a dinosaur, so don’t do that!

The dinosaur with the longest neck is called “Lusotitan Atalaiensis,” and it has 120 feet, or 36.6 meters long neck!

How big were sauropod dinosaurs?

Sauropods were the biggest animals ever to walk on land. Titanosaurs and Brachiosaurs, which were both Sauropods, are believed to have weighed over 100 tons! So if sauropods could walk on land today, they would be as tall as a 10-story building, or 30 meters high!

When the Diplodocus was first discovered, paleontologists estimated its size to be 52 m (171 ft) long. It turned out they misplaced vertebrae 12–19 as vertebrae 20–27 and had to correct the size to 32 m (105 ft) – but come on, that’s still pretty big! So for a long time, it was the biggest known dinosaur. Until Argentinosaurus was discovered, which had a length ranging from 30 to 40 meters (100 to 130 ft), and is now the biggest known dinosaur.

There might have been longer dinosaurs, but due to a lack of complete skeletons, Argentinosaurus is currently the biggest known dinosaur. Time will tell!

The most famous dinosaurs with a long neck (Sauropods)

There are over 100 different sauropods genera known, but the most famous are probably the Apatosaurus, Brachiosaurus, Brontosaurus, Camarasaurus, and the Diplodocus.

The Apatosaurus (ap-ah-toe-SORE-us), meaning “deceptive lizard”, is a dinosaur that had a maximum length of about 21–22.8 m (69–75 ft) and probably weighed over 20 tons. In other words, it was roughly the same size as a school bus. It probably lived between 157 and 145 million years ago, and its fossils were found in Colorado, Oklahoma, Wyoming, and Utah.

Brachiosaurus was a long-neck dinosaur with four pillar-like legs that had a relatively long tail. It lived about 150 million years ago during the Jurassic period and was approximately 30 meters (100 feet) in length. Its height at the hip was about 10 meters (35 feet). The name Brachiosaurus means ‘arm lizard’. The first fossil of this dinosaur was discovered near the South Dakota Badlands in the United States of America.

For a long time, it was thought that Brontosaurus may have been the same animal as the Apatosaurus, but they are now thought to be two separate dinosaurs. The name Brontosaurus comes from the greek and means thunder lizard. It lived during the Late Jurassic epoch 163,5 – 145 million years ago and measured up to 22 meters (72 feet) long.

Camarasaurus was a huge plant-eating dinosaur that lived during the late Jurassic period between 155 and 145 million years ago and grew up to about 40 feet long. Its name means ‘chambered lizard’ in Latin after the hollow chambers in its vertebrae. It had a very long neck and tail, but short forelimbs, to hold down leaves while it ate. Camarasaurus lived alongside several other bipedal dinosaurs with similar-looking heads, including Brachiosaurus and Apatosaurus, and Brontosaurus.

The Diplodocus was a dinosaur with a long neck and the biggest known dinosaur until Argentinosaurus came along. The Diplodocus lived at the end of the Jurassic period 156 – 147 million years ago, in what is now mid-western North America. It was a herbivore, focused on water plants, and had teeth that pointed sideways. The Diplodocus may have weighed as much as 16 tons!

Argentinosaurus was the largest known dinosaur. It had a long neck for eating plants from high trees and an overall length of 37 meters (121 feet). The name means “Argentine lizard.” A farmer discovered the fossil in Argentina in 1987. The Argentinosaurus is part of the family Titanosauridae, which lived during the middle Cenomanian to early Turonian ages (about 96 to 92 million years ago).

Why are sauropods extinct?

There are many theories on why so many species of dinosaurs became extinct. The most widely accepted theory is that a large asteroid hit the earth, changed our climate, and caused the Cretaceous–Paleogene extinction event (CP extinction event). The impact made much of the land barren for plants and animals because less sunlight reached the earth due to dust in the air. Some scientists also think that volcanic eruptions combined with an asteroid might have killed the dinosaurs.