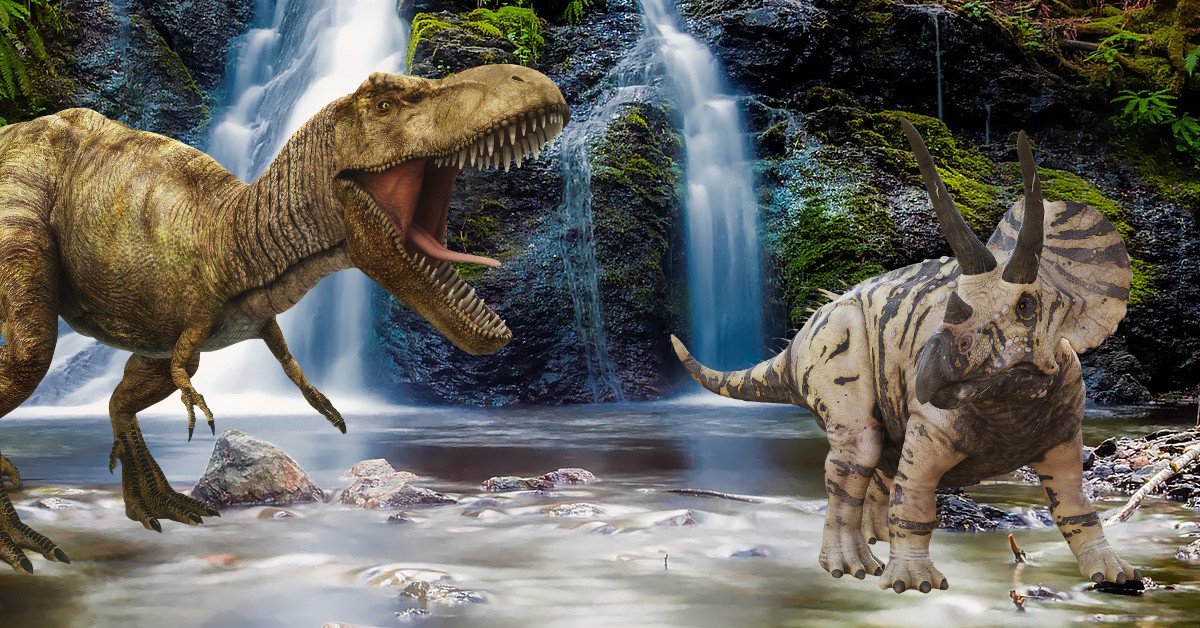 Yes! T rex And Triceratops lived at the same time during the late Cretaceous period, 66 million years ago.

There is evidence to suggest that T rex and Triceratops lived at the same time. This evidence comes from dinosaur tracks found in both Wyoming and Utah, where scientists discovered a combination of sediments consisting of clay and sandstone, which bear dinosaur tracks from the same era. These tracks indicate that Tyrannosaurus and Triceratops lived at the same time as they left behind their footprints together in the mud.

The Triceratops was a herbivorous four-legged animal with three horns (one larger than the other two) around its head and roamed in western North America and South America. The Triceratops is a member of the ceratopsian family, which contains about 10 species.

The Tyrannosaurus Rex (T rex) was a giant meat-eating dinosaur that lived during the same period.

T rex had two powerful arms, tiny short hind legs, and a gigantic mouth filled with many sharp teeth. This dinosaur also had a long heavy tail for balancing which made walking on two legs or running fast easier. They were hunters, and their diet included fish, other reptiles, carrion (dead animals), and smaller meat-eaters like the Gorgosaurus.

Some scientists believe that the T Rex was a cannibal as well, which means they hunted other, probably smaller or younger, Tyrannosaurus Rexes.

They have been found throughout western North America, from Texas to Alaska.

Both dinosaurs lived in what is now North America.

The T rex belongs to the Theropod family, which also contains the velociraptor and Dilophosaurus.

It is one of the most famous dinosaurs ever discovered; many books, television series, movies, and documentaries have featured it.

The latter is true for the Triceratops as well – it’s a dinosaur featured in many popular books and movies. This dinosaur lived in herds and had a neck frill to protect itself from hunters like the T-Rex, plus 2 sharp horns above its eyes and one above its nose.