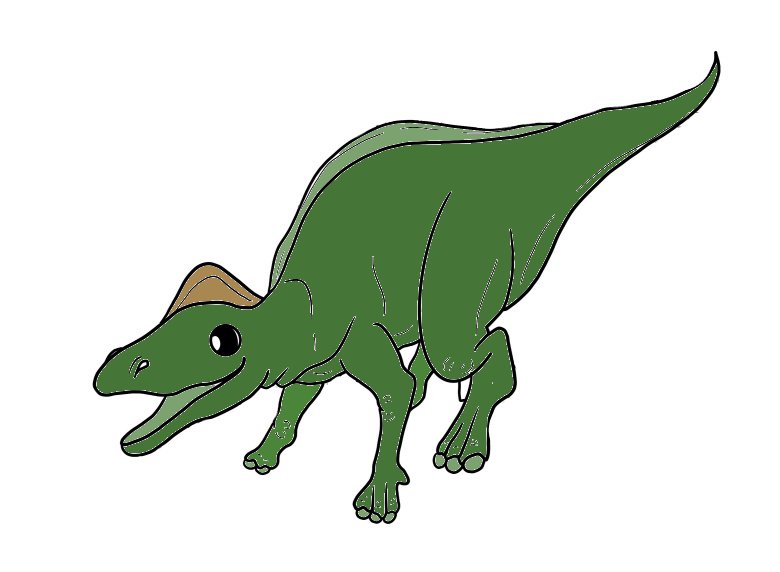 Corythosaurus is a dinosaur that lived 77–75.7 million years ago in what’s now Canada. It belongs to the hadrosaurids, a group of dinosaurs known for their “duckbill.” Almost all dinosaurs of this genus have been found in Canada. The name “Corythosaurus” means “helmet lizard” because of the bony crest upon its head.
As fossil remains have shown, they lived in herds and were probably able to walk both on two (bipedal) and four legs (quadrupedal).
Corythosaurus had an adult length of 9 meters (30 ft) and an adult weight of about 3 tons.

Corythosaurus was a herbivore and lived in a habitat surrounded by conifer trees. Fossils have been found with remains of plant matter, like conifer needles, seeds, twigs, and fruits. It had no teeth in its beak but several molars in its jaw.

It may have been able to dig into the ground with its beak to search for food (roots), just like modern birds do.
The Corythosaurus’s brain may have also been highly developed among dinosaurs (with a cerebral cortex similar to non-avian reptiles), making them more intelligent than most other herbivores.
Corythosaurus may have been preyed upon by Albertosaurus, another dinosaur that lived at the same time and place. Other animals that lived during the same period were the Velociraptor, Alamosaurus (with a long neck like a brachiosaurus), Euoplocephalus (an Ankylosaurs), Pteranodon (a genus of pterosaurs), Plesiosaurs, and Centrosaurus (dinosaurs that looked like triceratops).

Corythosaurus - In a nutshell