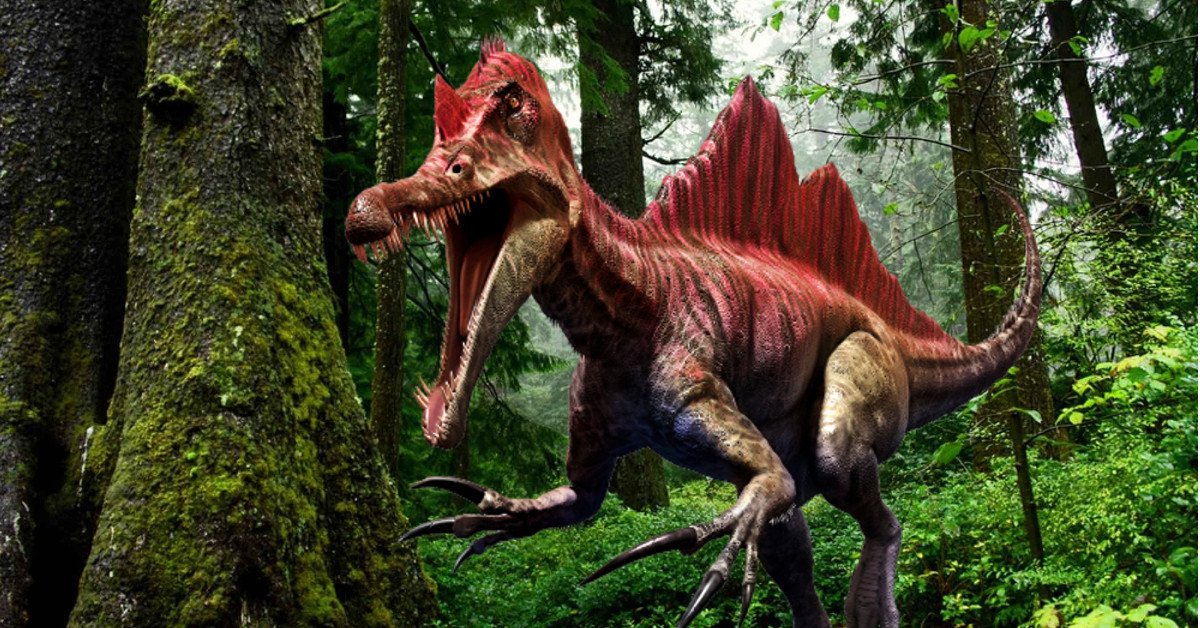 The Spinosaurus is a giant theropod dinosaur from North Africa, best known for the sail on its back. It was one of the largest known carnivorous dinosaurs, bigger than Tyrannosaurus, Giganotosaurus, and Carcharodontosaurus (Spinosaurus’ main rivals in size) and semi-aquatic (lived both on land and in the water)
This huge creature lived in what is now Morocco, Algeria, and Tunisia during the Late Cretaceous period, about 99 to 93.5 million years ago. During this time, many other types of dinosaurs lived in that region, such as Ouranosaurus, which may have been prey for Spinosaurus. But, of course, Spinosaurus probably was also prey for some other large dinosaurs like Carcharodontosaurus, at least when it was a young, still growing dinosaur.

One of the best examples of Spinosaurus is from a partial fossil that includes most of the spine and neck. Scientists have used this and other fossils to estimate that it was 43 to 50 feet (13-15 meters) long, 13 feet (4 meters) wide, 12 feet high at the hip when standing up straight, 8 feet 2 inches tall when swimming upright with its head above water (like an alligator), and weighed somewhere between 11 tons and 18 tons (22,000-40,000 pounds). This made it bigger than almost any other carnivorous dinosaur found so far.
When thinking of water dinosaurs, the plesiosaurus comes to mind. But these animals don’t classify as dinosaurs – they’re marine reptiles – just like the ichthyosaur. So that probably makes Spinosaurus what comes closest to an actual dinosaur that lived in the water.

Spinosaurus is in the group of dinosaurs called Theropods which includes Tyrannosaurus and Velociraptor. It lived during the Mesozoic Era when there were a lot of giant creatures living on Earth, such as 100-foot long Argentinosaurus, 35-foot long Megalodon (a type of prehistoric shark) 60-foot long Ankylosaurus, and 150-ton Brachiosaurus.

Spinosaurus Had A Preference For Fish

As a carnivore, Spinosaurus would have eaten smaller dinosaurs or even fish. After studying all its fossils, scientists have come up with several possible ways to hunt their prey. It could ambush its prey from the water like a crocodile or chase it down like a wolf on land.
It may have been able to kill almost any other dinosaur that it saw, although there is a lot of debate about what this giant predator ate.
Many scientists do not think that Spinosaurus was a water dinosaur because it would have to stand and move through the water. However, it did live near the coast, so perhaps it could swim in the ocean like some modern crocodiles, but it would be in danger from bigger sea creatures.
It may just have lived in smaller water bodies, like swamps, or rivers, like a hippo.

Spinosaurus may also have been covered with feathers like some of its relatives. If this is true, it might have lived on land but spent most of its time by the water looking for food like fish or smaller dinosaurs. Another possibility is that these feathery dinosaurs were “warm-blooded” (had an internal body temperature), which means they could tolerate colder areas than other large ceratopsians (horn-faced dinosaurs). If so, then perhaps Spinosaurus went to colder climates during the winter or found different prey types.

Spinosaurus Facts In A Nutshell