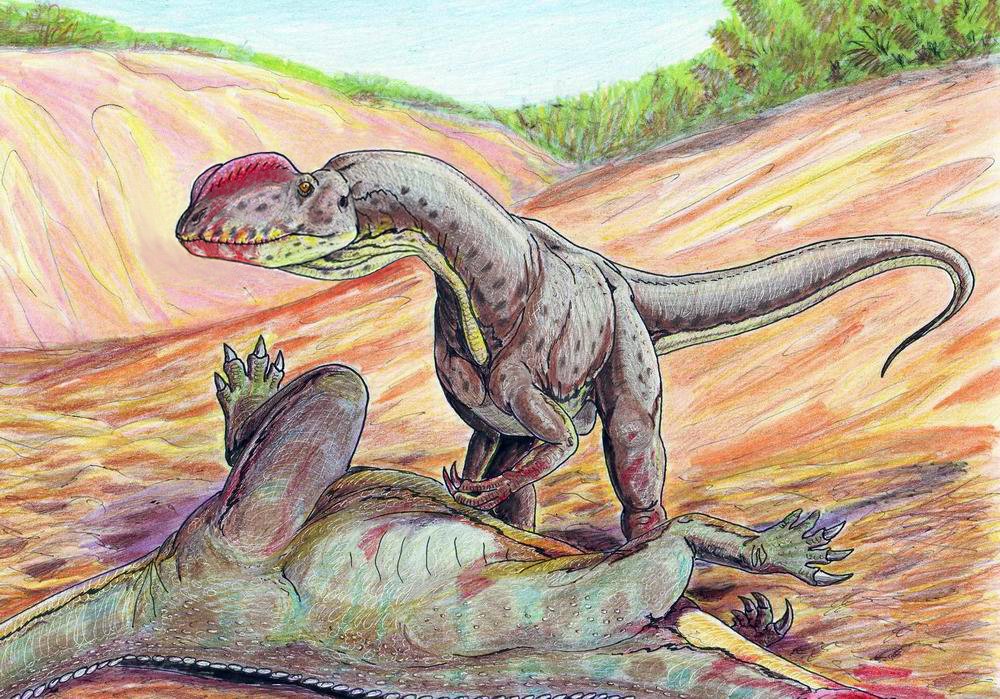 We all know Dilophosaurus as the cute little dinosaur from a certain dinosaur movie, where it had an impressive neck frill and the ability to spit venom! But was this based on facts? Read on and find… well, actually, let me tell you right away, they made it up. Totally made up.

But the real Dilophosaurus was still one of the most adorable dinosaurs, so read on and spend a few minutes of your life learning more about one of the most famous dinosaurs that ever lived.

What is a Dilophosaurus?

Dilophosaurus is a huge carnivorous dinosaur that has a unique way of killing its prey. It lived between 195-180 million years ago during the late Jurassic period and measured about 6 meters (20 feet) long with over 5 feet tall. In addition, this dinosaur was bipedal – meaning it walked on two feet, just like us humans do.

Here are some facts about Dilophosaurus:

Dilophosaurus gets its name from the unique crest on its head. It comes from Greek and means “two-crested lizard”! These dinosaurs had a wide, flat crest on both sides of their skull. That does make sense, right?

The most unique thing about this dinosaur was not its size but a huge frill at the back of its head. This frill has been compared to an umbrella, parrot beak, or even a cockscomb. It was too weak to use it in fights or to defend themselves, and paleontologists believe that it may have been used to frighten off rivals or communicate with mates. It was probably brightly colored!

Another interesting fact relating to its frill was present on fossilized skulls found in Utah, where the bone in the crest has been found to have circular holes on it. Some researchers believed that these holes were biting marks from another dinosaur. However, other scientists think that they were caused due to some infection or parasitic infestation.

There is no solid evidence available for their diet, but many paleontologists believe that due to its weak teeth, Dilophosaurus was a scavenger rather than a hunter. If it weren’t, it would have killed its prey using sharp claws and feet rather than teeth to prey upon smaller dinosaurs. But whatever its food source was, everybody agrees that it was a formidable carnivore.

Dilophosaurus Facts 5: The frills of these dinosaurs were ... it had no frills at all!

While some dinosaurs like triceratops do have a frill upon their skull to defend themselves, there’s no proof that Dilophasaurus had one or even two. There is a reptile with frills that looks like a Dilophasaurus, though. It’s called frilled lizard and was probably the inspiration for creating this dinosaur in Jurassic Park. The best thing is, it’s still alive. Look it up. It’s frightening!

Dilophosaurus Facts 6: It's an American!

The first fossils, including the fossilized skull of Dilophosaurus, were discovered in 1942 at Ghost Ranch in New Mexico by paleontologist Bob Sliter, who also named this fantastic dinosaur. Since then, several Dilophosaurus skeletons have been found across the US.

Fact 7: It's An Early Jurassic Dinosaur.

Dilophosaurus lived about 193 million years ago along with other animals like Ichthyosaurs and Plesiosaurs.

There are some popular beliefs that Dilophosaurus was a huge venom spitting, thanks to a particular dinosaur movie from the 90ys – but it isn’t! At least there’s no evidence to support this. However, it is possible that one of its ancestors had a venomous bite. Who knows? But if you ever meet one of these dinosaurs, trust me, they won’t spit any acid into your face.

Fact 9 It wasn't small at all.

Dilophosaurus is one of the most well-known dinosaurs of all time because it was used in Jurassic Park and due to its interesting appearance and behavior.

Most Interesting Dilophosaurus Facts In A Nutshell.